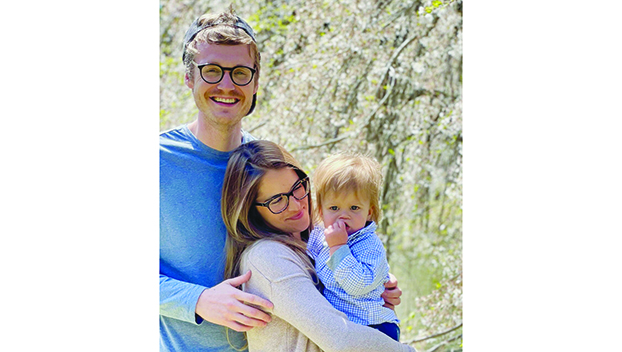 Jessamine County native Will Houp, with his wife Dara,and their son, Elias.

Will Houp, a Wilmore native, explains his journey to working for The New York Times as “a bit of a winding road.” He always knew he wanted to work on “big, ambitious projects,” but never dreamed he’d be part of Pulitzer Prize-winning news coverage only months into the job.

The N.Y. Times was honored this year by the Pulitzer committee with the prestigious public service award for its “prescient and sweeping” coverage of the COVID-19 pandemic. The committee described it as a “data vacuum that helped local governments, health-care providers, businesses and individuals to be better prepared and protected.”

And Houp, a newsroom software engineer, was partly responsible for that incredible data vacuum. However, he’s quick to point out that he was part of a massive team.

“So many people and departments contributed to the work and the story packages, it was amazing.”

A different kind of writing
Interestingly enough, Houp says he found his way into journalism and creative writing after getting kicked out of a homeschool co-op in 11th grade. “It was nothing significant or desperate, but I got into some trouble with the administration …”

After reflecting on what had happened, he realized he was having trouble expressing himself and turned to journaling. “I didn’t show it to anyone, just wrote about how my day went, short stories and poems. I really didn’t have any hobbies, and I kept coming back to writing …”

Houp first attended Asbury University with sights on engineering, “but after taking chemistry and math courses, I knew this was not for me.” He talked to his advisors, and eventually went into journalism and creative writing.

They helped me flourish and feel like I could do this. There was no looking back after that — this is what I want to do.”

He got married just before getting his dual degree and they moved to Atlanta, where he worked for some suburban newspapers, as well as in a restaurant to make ends meet. Eventually, he went back to get his masters from Northwestern University’s Medill School of Journalism.

He was on the investigative “track” of study, which was a year-long program. “Then I was talking to one of my friends who said most who got jobs out of school were doing technology in journalism tracks. That kind of freaked me out a little bit. College and grad school aren’t cheap, and I’d like a job …” so he began dabbling, working himself up to writing code.

In 2014, Houp’s wife was accepted into a psychology doctoral program, so they moved to Virginia Beach. He began a job with a local NBC affiliate, where he “wasn’t using the technical skills I’d learned, but we did do some interesting things. It just wasn’t what I wanted to do.”

After doing a few stints with more newspapers, he finally got on with The Virginian-Pilot. He found the “very fast-paced, daily-paper grind” he was looking for. “I was there for three years, and that’s where I really learned what it was like to sit on the fence between technology and journalism.”

He created graphics, did data analysis and wrote code to create internal applications for reporters and the digital team. “These were some formidable years for me, working there. I learned a lot.”

‘The stuff I dreamed of’
After his wife completed her program, she began an internship in Syracuse, New York, and Houp got a job at CNN as an interactive producer. But he continually kept an eye on The N.Y. Times — Houp was impressed with the interactive graphics, multimedia pages and the complex data analysis. “I was like man, it would be really sweet to be doing that stuff …”

Eventually, they moved to Jersey City. “I wanted to be closer to The Times, thought it would give me a better shot.” Houp’s persistence paid off — he began working for the paper in December of 2019, just months before COVID hit and everything went viral.

“I felt like The Times was doing the stuff I dreamed about doing. Coming out of J-school and working at the other places, I’d always dreamed about that but I really didn’t have a true vision of what it could be.”

And his wife was eight months pregnant when he began the job, so he took four weeks off in late January, returning for Super Tuesday. “At this point, there were a few cases in Washington, other parts of the states, but not many.”

Work began on the COVID coverage that was part of the Pulitzer award on March 10.

Houp had already been pulling in data to be part of specific stories, but then the “big call” happened, with the boss and all team members.

“The conversation was that we think this is going to be a massive thing happening, want to collect as much data as we can …” Houp recalls. The federal government was having difficulty providing a reliable, single source, and the team aimed to find “all the government sources we can — city, county, state, country. Johns Hopkins (University) was providing international data, and we sifted through it to report out those numbers, figuring out what we think is the most authoritative data set.”
States had different methodologies of reporting, as well as individual counties. Part of the team coming together was to build a consistent method to apply to all data.

“Early on, (agencies) were putting up PDFs or data files, or HTML pages, it was all over the place.” The team was tasked in collecting data in dozens of different ways, oftentimes having to scrap developed codes and write new ones when agencies transitioned to different types of files for reporting.

Houp began writing code for every single type of data they were pulling in, which was hundreds of files. “Then I transitioned to building an internal application with others, that would process this data and show it to our reviewers who were verifying the numbers, calling health departments, providing information for the data set we were going to publish. It was a massive undertaking.”

It felt like several months, Houp says, of sprinting to get the whole process ready and fix issues, and add the features that readers want. “At this point, it’s leveled off. We have a stable application and process, we’re not working so frantically now. And I think we’ve built this solid foundation that continues to work for us.”

When asked if Ron and Kathy Houp are proud — his parents back in Wilmore — Houp laughs and says “oh, yes.” In fact, he says, “it’s hard for them not to tell everybody.”

As far as what Houp has his eye on next, he says, “I don’t know; I really love the job I have right now. We continue to get big projects to work on. Right now, we’re gearing up for the Olympics in a month. I’m really enjoying the stuff we’re doing.” 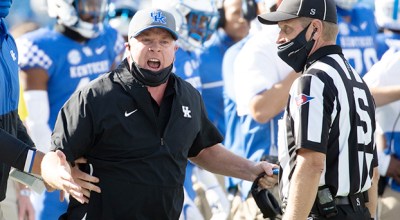 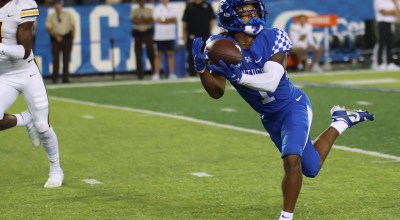