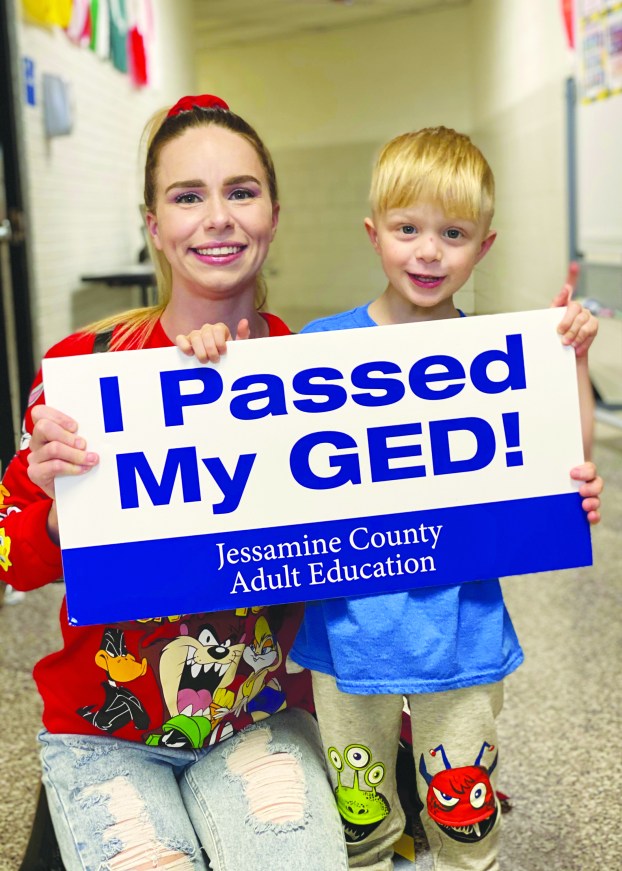 Christina Coyle recently got her GED from Jessamine County Adult Education by taking the test online. Her 4-year-old son, Conner Abney, was happy for his mom.

Christina Coyle quit high school at 17 when she was a junior and thought she would never get her degree — until she was a 30-year-old mom and began to think differently.

“That’s mainly the reason I wanted to go back to school, to show my son that I could do it,” she said. “I found myself thinking about when he’s 16 or 17 and doesn’t want to go to school, well, what’s the dropout going to tell him?”

Coyle wants to be able to provide for her 4-year-old son, Conner Abney, and for him to be proud of her.

Mary Newton, director, said Adult Education began offering the online option last year in response to the coronavirus pandemic because all the testing centers were closed for several months.

Since 1942, students have always tested in GED exam centers, but last year GED Testing Services (Pearson Vue) implemented the online proctored exam, which benefited parents like Coyle who had to stay at home because the day cares and schools were closed, and they had to care for their children.

Even though Adult Ed is reopening this month and will be offering in-person classes and testing again, it has decided to continue the online proctored test as well.

“I wouldn’t have been able to get my GED if I didn’t have this option,” Coyle said.

Coyle said she didn’t have to take classes because she was able to test out of them, but she did need a little online tutoring in math. It was hard, she said. She failed it the first time, but she studied hard and passed when she took it again.

She said Hayden Cain, the distance learning coordinator and instructor for Adult Ed, helped her with the online math course.

The test can be taken at any time of the day, and she took it at 5 in the morning when Conner was asleep.

“I had to get it done before he was up, because you can’t have any distractions,” she said. “There’s somebody watching you through a camera on your computer while you’re taking the test to make sure you’re not cheating.”

The process is strict, she said. The student has to take photographs of her desk and all the walls, and if she looks away from the camera, she gets a warning. If she does it too often, they shut it down.

It wasn’t easy, but it was worth it.

“I really didn’t see myself getting it, so it’s a big accomplishment for me,” Coyle said. “I know that with an education, that opens a lot of doors for me so I’ll be able to do what I want to do in life and be successful.”

What she wants to do, she said, is care for terminally ill patients. Her father died last year, she said, and that experience caused her to  want to help people who are “going through that.”

She wants to go to college and become a nurse, she said, but she’ll probably begin as a caretaker.

Coyle said she dropped out of school after her mom kicked her out of the house as a teenager and went to stay with her dad. She was going to have to change high schools, but she didn’t want to go to the new school and they wouldn’t let her continue at her old one, so she gave up.

“I just threw in the towel,” she said.

She got married when she was 18 to a “loser,” she said, and was divorced in three years. Then she met the guy who is Conner’s father a couple of years later and they’re still together.

Conner goes to Jessamine Early Learning Village, which is right next to the Adult Education Center on Wilmore Road, and will be starting kindergarten in the fall.

“I told him, ‘When you get out of school, I’m going to take you to Mommy’s school and let you meet her teachers,’” she said. “He was excited, but I don’t think he really understands. But he will.”

Coyle said she was surprised by how many people asked how she did it when she got her GED, and who told her they want to get theirs.

“It’s nice to inspire people, to have somebody look at what you did and want to do it too,” she said. “I never thought I would get mine, so to show people that it’s possible is an empowering thing.”

Newton said Jessamine County Adult Education has been doing almost exclusively online learning during the pandemic but beginning March 15, it will have a full set of classes, and there will be both in-person and virtual options.

Testing at the school will be on Tuesdays and Fridays.

In an effort to make the GED course and test accessible to everyone, if a student doesn’t have a computer at home, Adult Ed can lend them a laptop.

“Right now, the GED test is available for free for first-time test takers,” instead of charging the usual $120 per test, Newton said.

Newton mentioned that nearly 14 percent of Jessamine County adults don’t have their high school degrees, one of the highest percentages in the state. But by getting their GED, they can earn, on average, about $9,700 a year more than those without one.

“That makes a big difference over the course of a lifetime,” Newton said.

More information about adult education and the GED are available by calling 859-887-9052 or by visiting the Jessamine County Adult Education web page at https://sites.google.com/jessamine.kyschools.us/adulteducation