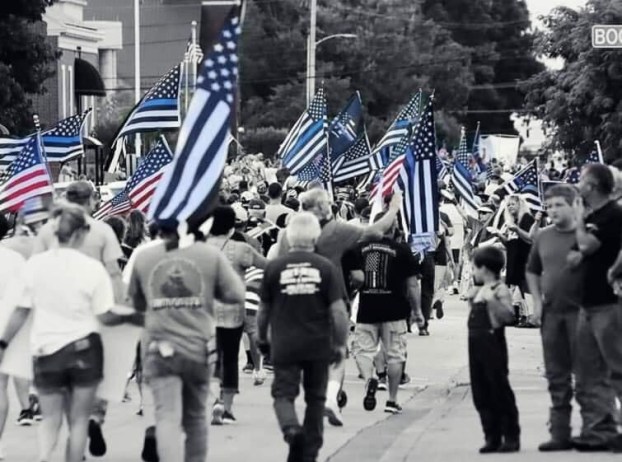 An event called Berea Backs the Blue on Aug. 1 was the model for the Nicholasville Blue Walk being organized by Ryan Mills and Josh Parsons. It attracted several hundred people who walked to support law enforcement. (Photo submitted)

Across America, perceptions about police have changed in 2020, but here in the Bluegrass, there are people who want it known that they “Back the Blue.”

On Saturday, Oct. 24, at 6 p.m., there will be a Blue Walk on Main Street from the Nicholasville Police Department to the Jessamine County Courthouse to show support for law enforcement.

Inspired by an event in Berea Aug. 1 that involved 1,400 marchers, friends Ryan Mills and Josh Parsons wanted to replicate that experience.

“I feel like the national media has been giving the wrong message of the whole defunding the police thing,” Mills said, and he wants to offer a different narrative. “It’s not political, it’s simply an event to show support for our law enforcement.”

One of the speakers, however, will be a politician, Republican candidate for the 39th District state House seat, Matt Lockett, who confirmed Monday that he would be there.

Pastor David Kibler from Catalyst Christian Church behind the courthouse is supposed to pray at the event.

Also Monday, Mills said he and Parson had been assured by the District 7 state transportation office in Lexington that they would have the permit for the march.

Main Street will be closed beginning around 6 p.m.,when the walk starts, but one lane will be kept open for emergency vehicles, Mills said.

Before the march, there will be a vendors’ fair in the parking lot of Turning Point church next to the police station, Mills said. The fair will close in time to use the lot for parking, and Mills said they are asking City Hall and other businesses in the area about using their parking spaces.

Parsons has a company that sells apparel commemorating police and other first responders. He made $3,000 in three or four hours at Berea Backs the Blue and will be set up in Nicholasville, Mills said.

“I’ll tell you, it was an absolute awesome event, and it went off without a hitch,” Mills said of the walk in Berea.

Soon after, the friends started talking about doing a similar event in Nicholasville. They started a Facebook page to promote it, Nicholasville Backs the Blue Walk.

Mills said the city isn’t sponsoring the event because officials didn’t want to open the door to other groups wanting to have mass gatherings in a pandemic. COVID-19 has also made it hard to get affordable insurance, he said.

Mills said he and Parsons want to do the walk legally and safely and ask the walkers to wear masks. He said the Berea walk got some criticism because of people “not masking up and that sort of thing, but it is what it is.”

Sgt. Kevin Grimes, a spokesperson for the Nicholasville Police Department, said Mills and Parsons reached out to the police about doing the walk.

“We think it’s a great opportunity for the community to come together and support law enforcement,” he said.

He said he hopes many people turn out for the event and that the gesture is appreciated.

Mills said he comes from a “long line of preachers and carpenters” but has a brother who is a reserve sheriff’s deputy in Indiana, and he has always been supportive of police.

He said that when he was a boy, kids wanted to be cops.

“They were viewed as heroes, and they should be,” he said.