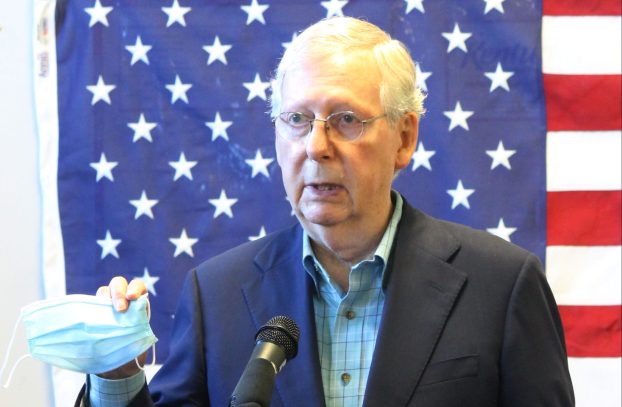 Sen. Mitch McConnell, R-Ky., visited several Kentucky cities last week and spoke about the importance of people doing their part to stop the spread of the coronavirus by wearing face masks. The federal government can't afford to allow the economy to shut down again, he said, because there is not enough borrowing capacity to do so.

Closing businesses, schools, parks and beaches helped slow the spread of the novel coronavirus, but as all these have opened up again, infections and deaths are soaring because people aren’t taking necessary precautions, according to Sen. Mitch McConnell, R-Ky.

McConnell said last Wednesday that shutting down the economy again isn’t going to be an option because the federal government doesn’t have enough borrowing capacity, so each person must do their part for public health and economic recovery: cover their face and keep their distance.

“This crisis is clearly not over,” he said during a press conference in Winchester prior to visiting a health care provider’s office in Mount Sterling. “Until we get a vaccine, wear a mask out of respect for yourself and others.”

McConnell, leader of the Republican majority, said the Senate has been in almost continuous session since May, and during that time, senators have been wearing masks and social distancing.

“We have been able to work safely, and I’m confident everyone else can do the same thing,” he said. “It’s not asking too much to put on a mask and to social distance. I’ve tried to emphasize that everywhere I’ve gone, and that we’re practicing in the Senate what we’re preaching for everyone else to do.”

It is, he said, “the single best thing you can do to prevent the spread.”

McConnell had a surgical mask but didn’t wear it when he was speaking, and he asked reporters to lower theirs when they asked questions, so he could better hear their questions.

One reporter asked about the message President Donald Trump was sending regarding wearing masks, and McConnell said he couldn’t speak for anyone else, but he thinks it is “the responsible thing to do.”