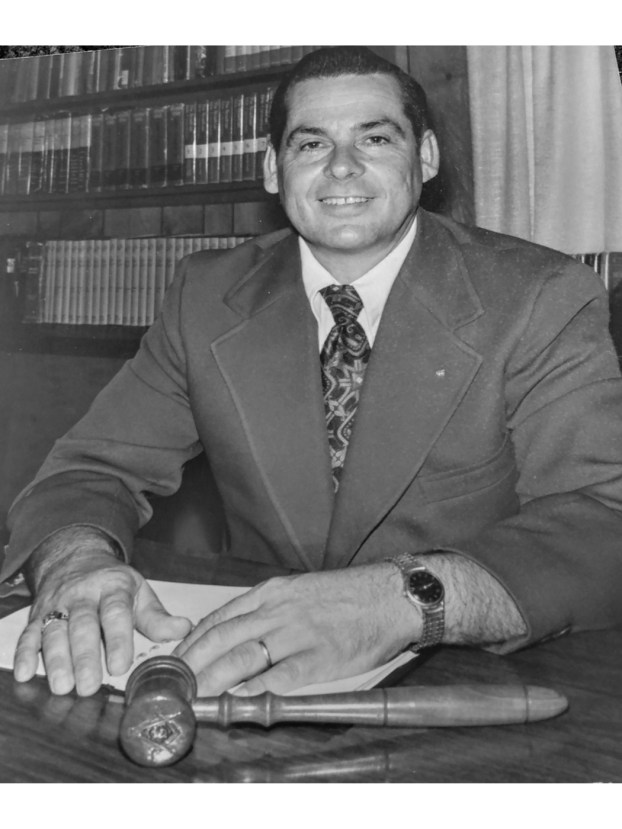 Jim was also preceded in death by two sisters, Rosa Calfee and Edith Rowland, and a brother, Herbert Mason.

Jim first served his country in the ARMY AIR CORPS at age eighteen. After serving, he began his career laying and installing floor and ceiling tile. He literally worked on his knees providing the wonderful life he gave his family. He also served on the Board of Directors in his union representing his coworkers. He was a Charter Member of Edgewood Baptist Church and was instrumental in the committee to have the church built. He served as a deacon there and also served his church in many other roles. He was 32nd degree Mason in the Hart Masonic Lodge. He also served as a Master in the Masonic order. He had great respect for his Masonic brothers and was very active in the Lodge’s activities.

His proudest achievement in life was serving the community as first a City Commissioner and then elected Mayor of Nicholasville. Under his tenure as Mayor, he got the city employees into the state retirement system and started the Jessamine Jamboree for the community to unite and enjoy our city.

Jim loved all of his family and will be missed by all. Two months shy of his 90th birthday he joined his Heavenly Family and lives forever with our Savior, Jesus Christ.

Services was 10:00 a.m. Wednesday at Betts and West Funeral Home with Rev. Bob Blankenship officiating. Burial was in the Camp Nelson National Cemetery. Visitation was Tuesday from 3:00 until 8:00 p.m. at the funeral home. Family served as Bearers. Online guestbook at www.BettsandWestfuneralhome.com

In Loving Memory of Scott Clifford Kelly. Born on July 22, 1974; Passed away on March 12, 2018. Beloved son of Lowell and the late Barbara Kelly. Survived by his brother Sean Kelly, Sister-law Amy Kelly, Niece Katlin Kelly and nephew Tyler Kelly. Viewing will be held at Hager and Cundiff Funeral Home Thursday, March 15, beginning at 4:00 p.m. and ending at 8:00 p.m.. The funeral service will be held at the funeral home Friday, March 16, at 1:00 p.m.. Rejoice in the Lord always. Philippians 4:4. Hager & Cundiff is honored to serve the Kelly family. www.hagerandcundifffunerals.com Obituary lovingly submitted by Scott’s family.