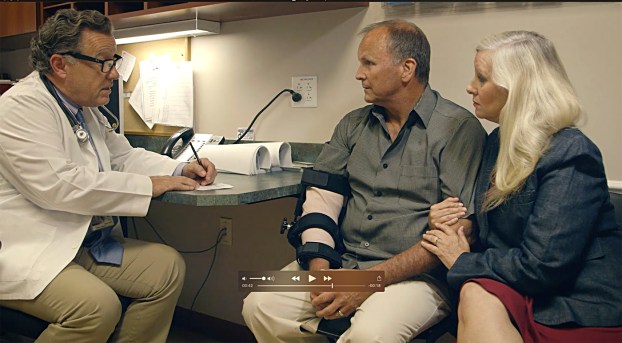 Several Jessamine County officials pulled together to create a public service announcement (PSA) aimed to educate the public, specifically a 35 and older demographic, about the dangers of opiate prescription pain medications leading to heroin addiction.

“The Opiate Epidemic and You” made its debut on Wednesday, June 28 at the Andrew S. Miller Center for Communications at Asbury University in Wilmore.

While many agencies and counties are aiming drug abuse education programs at younger age groups, the numbers regarding addiction among the older demographic have risen to what Goettl has described as “staggering.”

“When I saw the Kentucky Injury Prevention and Research Center (KIPRC) report in April, I realized that older residents who have been prescribed highly addictive pain medications such as oxycodone are also at serious risk of becoming addicted to illicit drugs,” Goettl said.

He said once the prescriptions are cut off, there is an ever-increasing risk that those older residents will turn to heroin.

According to a study provided by KIPRC, there has been an increase of approximately 61 percent in drug overdose hospitalizations among Kentucky residents 55 and older from 2000 to 2014.

Heroin has climbed to the top of the list of drugs contributing to Kentucky overdose deaths with 293 deaths in 2015 compared to the 42 in 2011, according to a press release regarding the PSA.

“It’s a disturbing trend, and it began in earnest just under four years ago,” Goettl said. “My office handles felony preliminary hearings, and we went from one heroin possession case over the course of my first 10 years in office – to an average of two or three cases a week starting in late 2013.”

The PSA that became available on Wednesday is only one of many tactics to put a dent in the current drug abuse epidemic.

The county attorney’s office also partnered with the Commonwealth Attorney’s Office to develop a CORe criminal docket designed to get low-level drug offenders into treatment programs as quickly as possible.

A Special Assistant United States Attorney began working with the Jessamine County Attorney’s office as well as local law enforcement to develop federal criminal cases against those dealing heroin in the community.

“We are the only county in Kentucky that I know of with a Special Assistant United States Attorney who is dedicated to going after drug traffickers,” Goettl said.

After writing the PSA, Goettl recruited former Commonwealth Attorney Tom Lockridge, a principal owner of Lucky Day Studios LLC, to produce and film the project, which cost $5,000 to create. Funding was provided by the Jessamine County Fiscal Court and the Jessamine County Attorney’s Office through prosecution programs such as the traffic diversion program, the cold check program and the insurance monitoring program, all which help to re-educate those who have been prosecuted. Goettl said in an interview with The Jessamine Journal on Wednesday that these programs have generated around $40,000 this year.

“To my knowledge, no one else is addressing the problem as it relates to those 35 and older,” Goettl said. “I conceived and wrote the PSA, but the credit for the project should go to those in my office—to my prosecutors who run the prosecution programs that have funded the PSA and child support staff who deal with addiction problems on a daily basis.”

The PSA will be available on www.jessamineco.com and www.jchd.org, as well as the Jessamine County YouTube channel. It will also be shown during previews at the Movie Tavern in Nicholasville’s Brannon Crossing Shopping Center

“Our hope is that this PSA will eventually be viewed throughout the country,” Goettl said. “And that it will start a new conversation of educating older adults regarding the dangers presented by prescription painkillers and opiate abuse.”

Goettl said the PSA is already accomplishing what he hoped it would, which is creating awareness about the opiate addiction problem that is not getting better, but worse.

“An ounce of prevention is worth an ounce of cure,” he said.