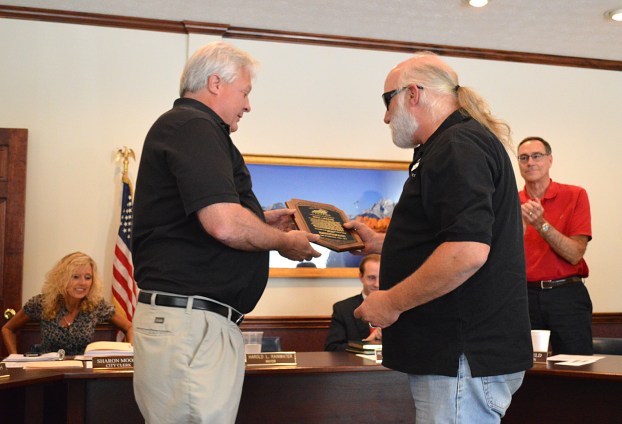 After over 21 years, LaSage is retiring from Wilmore Utilities

The Wilmore City Council meeting began on an emotional note on Monday night as the city bade farewell to a retiring employee.

After 21-and-a-half years of serving Wilmore, Mike LaSage retired from his position as operations manager for Wilmore Utilities. He was given a plaque written by Director of Utilities and Public Works David Carlstedt.

A quote that is written on the plaque and seemed to be the theme of LaSage’s career was “Perfection is the goal, but excellence is tolerated.”

He recalled LaSage’s interesting interview and the many memories that followed afterward at the meeting on Monday night.

In 2000 LaSage received recognition for being the best water plant treatment operator in the state.

The meeting continued with a closed session for pending litigation against the city from the owner of Roseglade Farm, Hal Snowden. No action was taken.

Actions that were taken include:

• The Wilmore City Council approved to help fund the upcoming Story Telling Festival in the fall, which will cost approximately $5,000.

• The second reading of Ordinance 5-17, which will establish a Joint Tourism Commission between Nicholasville, Wilmore and Jessamine County, was approved. The ordinance also authorizes the enforcement and collection of a three percent transient room tax.

• The second reading of Ordinance 2-17, adopting the annual budget for 2017-2018, was approved. Despite requests from council members Lynn Cooper and David Riel, no funds will be transferred from the bond fund into the streets and sidewalks fund. However, the Wilmore City Council did voice their interest in taking on projects improving roads and infrastructures within the city.

• The second reading of Ordinance 1-17, increasing water and sewer rates by two percent for the 2017-2018 budget was approved. The money that comes from the increased rates will cover the rising costs of the city.

• The Wilmore City Council gave Carlstedt permission to bid up to $4,000 on a surplus bucket truck in Versailles. Carlstedt said it has been several years since the city has owned a bucket truck.

• The second reading of Ordinance 4-17, changing a zone from an Agricultural Zone (A-1) to Professional (P-1) for 9.02 acres submitted by Wesley Village for property located at 1125 Lexington Road was approved.

• The Wilmore Fire Department presented the council with T-Shirts to say thank you for their support.