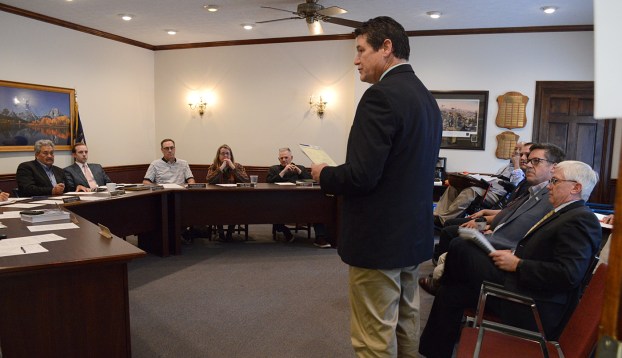 The Wilmore City Council saw a full house at the meeting on Monday night. Among the crowd were Judge Executive David West, Mayor of Nicholasville Pete Sutherland and Chairman of the Nicholasville Tourism Commission Tommy Cobb.

The three official’s presence regarded an agenda item to propose an ordinance for a Joint Tourism Commission for the cities of Nicholasville and Wilmore as well as Jessamine County.

West said the endeavor for the joint tourism commission began when the person on special projects for the county, Mary Kozak, who also worked with the Jessamine County Tourism, announced that she was retiring. Nicholasville Now also lost a tourism representative around that same time.

The Nicholasville Tourism Commission decided it was time to hire someone to fill the spot.

West said he wanted to invite Wilmore to join Nicholasville and Jessamine County in tourism. He suggested the three entities work together to bring more people into the county, and to better coordinate the calendar of events such as sports, marathons and festivals.

West said the communities need to work together to invite people who are visiting the county to stay in the county, rather than visiting and then staying in Lexington.

“Fill up the rooms here first, that’s the whole point of it,” West said.

In order to do that, Wilmore, Nicholasville and Jessamine County would all have to adopt the same ordinance in order to form a new tourism commission and board.

Currently, West said Nicholasville has an ordinance that has a 3 percent fee for guests who stay in the city’s hotels and motels.

If the three entities joined together, the fees would all be combined.

Jessamine County has been funding its own tourism and would pledge to continue to fund the joint tourism commission in addition to the fees collected, West said.

“We all share in the same pot,” West said. “We all have the same resources. I think it’s a home run for everyone.”

“If Jessamine County or Nicholasville did for their citizens like you do for yours, nobody would go anywhere else in Central Kentucky,” West said to the Wilmore City Council.

Sutherland said he agrees that the county is better when everyone works together.

“The City of Nicholasville is behind this 100 percent,” Sutherland said. “And we want Wilmore to join us and be a part of this because I think we could do some really great things.”

Cobb said Nicholasville tourism alone can bring in around $120,000 a year, and this year was even more than that.

After the three officials presented, Wilmore City Council Member Lynn Cooper voiced a concern of Wilmore getting lost in the plan.

Director of The Wilmore Community Development Board Judy Woolums, said the board does all of this on a budget of about $8,000. Around $1,200 to $1,300 of that is used to advertise and promote the events.

“There would be no way that we would want Judy to not do what Judy does nor lose Judy here,” Wilmore Mayor Harold Rainwater said.

West said having that $200,000 budget would create more exposure and opportunities for Wilmore.

“If Wilmore got lost, I think that tourism gets lost,” West said.

The three will be invited back at a later date to meet with community members who would be involved in the decision to combine the tourism commissions, and to discuss how Wilmore and Jessamine County will benefit from the ordinance.

The next Wilmore City Council meeting will be at 6 p.m. on Monday, May 1.